This work was written by me for the concert “Midsummer concert – in the shade of poetry” which was held at the Hikarigaoka Museum of Art in Nerima-ku, Tokyo on July 25th. The song has a playing time of less than 6 minutes and is composed for soprano, erhu, and piano.
The meaning of this title of the song is “Isn’t the summer night expo sad?

Chuya Nakahara is a Japanese poet and translator. He was born in Yamaguchi Prefecture in 1907.
He reveals his poetic talent at a young age. At the age of fifteen, he participated in the Tanka-community “Suguronokai（末黒野会）”, and published a poetry collection “Sugurono（末黒野）” with his friends in secret to his strict parents. Around this time, his grades plummeted, and his behavior became a problem. After that, he transferred to Ritsumeikan Junior High School (Kyoto), and moved to Tokyo because of the university entrance exam.

In Tokyo, He made friends with Hideo Kobayashi, Shinkichi Takahashi, Saburo Moroi and others. He enrolled in the Department of Preparatory Course at Nihon University at April in 1926, but dropped out in September. He attended Athens Francais (private language school) and learns French.

In 1934, he published a poetry collection “Goat’s Song(山羊の歌)” at his own expense. In addition, he worked on the Japanese translation of Rimbaud. Around this time, he married Takako Ueno, a distant relative, and his eldest son, Fumiya, was born.

Chuya, who loved children, was very annoyed and loved Fumiya well, but in 1936 Fumiya died of childhood tuberculosis. After that, Chuya was ill both physically and mentally, and died in 1937 at the age of 30.

This work is an unpublished psalm written following the fragment of the diary “Fumiya’s Life” at the time of Fumiya’s death. At the end of Fumiya’s life, there is the following description, and this document ends here.

On a warm spring day, I visited Ozawa with my son at the Banshu Kaikan and bought a goldfish for my son. I went to the zoo at the same time. The crow that jumped into the forest when he entered the park was called “meow meow” by my son. It seemed that he didn’t even know what the big elephant was. He saw a child’s elephant and called it “meow meow”. He called “meow meow” whether he saw the leopard or the crane. At the same time, I was allowed to watch the beast hunting at the Showa Memorial Museum. He watched it with all his heart. Around June, I took Atsuo and my son to Yotsuya Kinema in the evening. He was sleepy, so I made him watched it while eating rice crackers. Atsuo July stayed in a different place. Around August, I walked around Shinjuku with his son to buy his shoes. Around spring, I, my wife and my son went around the night shop. At the beginning of August, we went to Kagurazaka with three. At the end of July, I went to the World’s Fair and saw the circus. We got on an airplane. The son was pleased. On our way home, we took the road through Shinobazu Pond. We saw the night shop in Ueno.

Chuya describes the memory of the day he went to the exposition at the end of July in the text as “Natsu no Yo no Hakurankai wa, kanashikarazuya”.

This work was composed by incorporating a cyclical structure into the lyrics of first and second verses. The materials used in 1st verse and 2nd verse are the same, but the detailed structure has transformed.

While my wife was shopping,
I and my little boy were in front of the elephant.
The two of us crouched down, and soon after, my wife came.

The three of us left the exposition. Isn’t it sad?
Standing in front of the Shinobazu Pond, the little boy was looking.

It was the biggest creature in the water that the little boy saw.
Isn’t it sad?
He was watching it as his hair was blown by the wind.
Isn’t it sad?
Then I pulled his hand and walked out to Hirokoji.
Isn’t it sad?

I bought him a toy in Hirokoji.
It was a rabbit toy. Isn’t it sad?

The materials used for the whole, such as the arched sound shape and the rhythm material of 2 beats and 3 series, were presented in the 1st series and used repeatedly thereafter.

The characteristic of this poem is that “Isn’t it sad? (kanashikarazuya)” is often used. As a way to express sadness that is hard to describe, I omitted the lyrics and used this phrase as a melody.
2nd verse starts with the melody at the beginning of 1st verse being sung by Erhu, and the soprano part that re-includes the material of 2 beats and 3 consecutive beats leads the structure.

Meaning in English
The time when we just entered the exposition that day,
It was still bright and the day was out.

The three of us got on an airplane.
We got on that swirls around.

The evening sky was a dark blue color.
The light was the color of the shell button.

Where can you listen this song?

This world premiere song was played in “Midsummer Concert -In the Shade of Poetry-” at the Hikarigaoka Museum of Art on Sunday, July 25th.
You can watch ondemand movie on “Peatix” 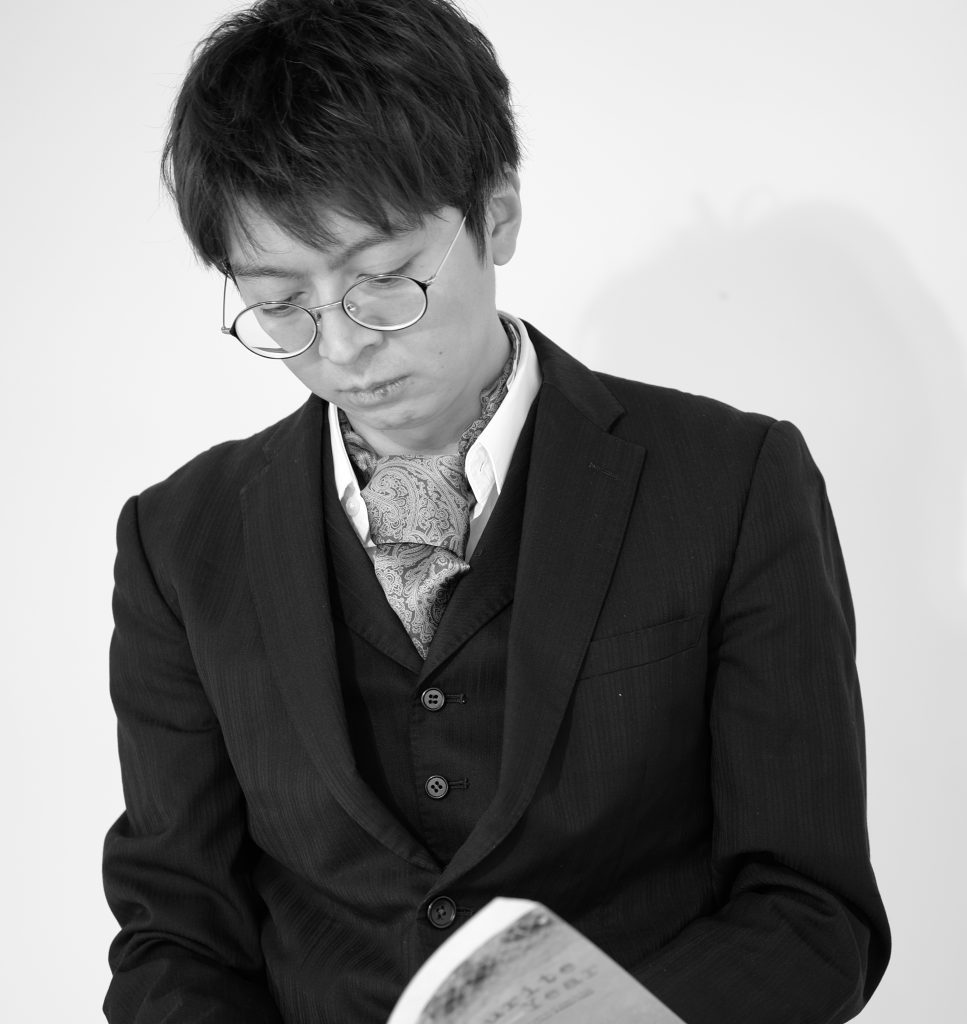 Since entering Tokyo University of the fine art and music, Faculty of Music, Department of Music Science in 1999, I have been studying with a keen interest in contemporary music, composition, and stage performance.
While in school, I presided over voluntary concerts and theater performances , studying about the creative relationship between text and music.
From that time, I’ve noticed about the importance of community-based art festivals or music festivals.
And I hoped to be involved in such projects in the future.